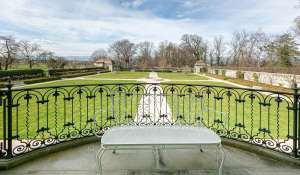 Having fallen into disrepair during the 19th century, the estate was bought back and restored at the beginning of the 20th century. In 1942 it became the residence of the Queen of Italy and the Italian royal family until 2005, when it was sold by her descendants.

Today the estate, built on approximately 48 hectares of agricultural land in the commune of Meinier, consists of a main building, the castle. With a total living space of approximately 1,500 sqm on 3 levels, it offers 8 bedrooms and magnificent reception rooms.

The pavilion and the former Merlinge chapel are listed as historical monuments, as are the landscaped gardens on the plot.